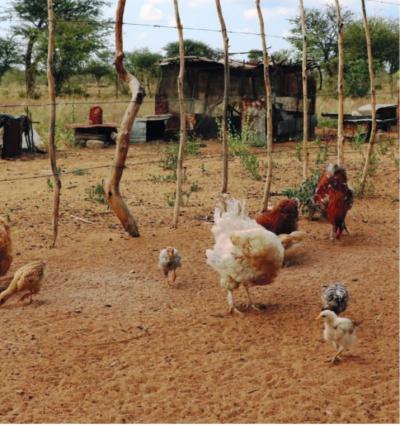 While backyard poultry production helps to boost food security for many rural households in developing countries, a lot can be done to improve output in these smallest of small-scale operations. Jan Grobbelaar, training director at Dumela Poultry Solutions in South Africa, explained that backyard birds usually have to fend for themselves, “They are rarely provided with feed, water, medicine or shelter, but walk freely around villages scavenging for food.”

This type of scavenging presents a huge disease risk, as birds might come into contact with other disease-carrying birds or animals, says Grobbelaar, who has been supplying consultation services to backyard farmers all over South Africa and has even written a training manual on the subject in an attempt to empower them. Losses might also be suffered due to birds not being protected against the elements, injury, theft or predators, such as cats and dogs.

Hens tend to have to find their own nesting places, which ten to one will be unsafe. Many of the nests might be difficult for the farmers to find, and once discovered the freshness of the eggs might be questionable. Chicks that hatch under these conditions also struggle to survive. “We have found chick mortality to be as high as 97 percent in some cases,” says Grobbelaar.

“Having a coop restricts the movement of birds,” he says, “so that the owner can keep a better eye on them. It allows farmers to identify problems such as diseases early, and eases the management of brooders and young chicks.”

Backyard poultry often suffer from malnutrition, which renders them vulnerable to diseases and has a negative impact on their growth. Grobbelaar says he has come across many backyard farmers who were under the impression that birds could live off grass – whereas chickens are unable to digest grass, and will instead live off seeds and insects.

Since most of the farmers have no means to buy feed, he teaches them to produce fly larvae which have a very high protein content. “To produce larvae, the farmers put rotten food scraps, such as cabbage, in a bucket which is suspended on a pole or something,” explains Grobbelaar. “The food scraps attract flies, which lay their eggs in it. Larvae, once hatched from these eggs, move to the bottom of the bucket and fall through holes made at the bottom of this bucket. Another bucket, positioned underneath the first bucket, is used to collect the larvae.”

Alternatively, farmers may harvest termites as a food source. “It is quite difficult to harvest termites sustainably,” he says. “I teach the farmers to remove part of a termite nest by making a hole in it. The hole is covered up with dry grass to accelerate the restoration of the nest. It takes up to nine months before a nest can be harvested again.”

Many of the backyard farmers in South Africa produce maize, which they store on their roofs. Grobbelaar tells them to feed any maize that has gone mouldy to their birds: “Backyard chicken are much more hardy than modern commercial birds and in effect able to stomach certain foods that would have caused toxicity problems in the modern birds.”

Birds should also be supplied with fresh, potable water and drinkers and feeders should be cleaned daily to keep them hygienic.

Make the most of chicks

It is much easier to manage egg and chick production if birds are kept in coops. Grobbelaar has come across farmers who do not want to remove eggs, thinking it will have a negative impact on brooding. This, however, is not true, says Grobbelaar: “Farmers should remove and sort eggs daily. They should keep about ten eggs that weigh 55g to 60g in a cool place and place these under the hens for hatching when they become broody. The rest of the eggs can be eaten or sold.”

Once chicks have hatched, a small stick enclosure can be built over the chick feeding area to prevent grown-up birds from eating the chicks’ food. This will reduce competition and help chicks grow faster.

Be aware of biosecurity

It is extremely difficult for backyard farmers to practise sound biosecurity measures, since the birds are being raised outside. Nevertheless, farmers should be aware of the disease risks in their area and do what they can to prevent their birds from coming into contact with any potential sources of infection. They should, for example, restrict contact with other birds and animals as much as possible, and use sound hygiene measures to prevent themselves or others from infecting birds whenever humans have been in contact with possible transmitters of disease.

Newcastle disease, according to Grobbelaar, is one of the greatest threats that South African backyard farmers have to deal with. “Farmers might be doing everything right, but Newcastle has been known to wipe out whole populations of birds in a village in a week. Production then has to be built up from scratch,” he warns.

Vaccinations are available to protect birds against Newcastle disease, but this is a costly procedure and not always effective. Grobbelaar pointed out that the vaccinations only provide protection for up to six months. There are also a lot of vaccination failures, due to improper handling, storage and application.

There are indigenous breeds that are hardier than others in combatting certain regional disease strains; such breeds include the Koekoek and Ovamba in South Africa. Getting hold of these birds is nevertheless difficult, as there are not many breeders raising them. Most of the breeds produced by backyard farmers, in effect, are mixtures of different species that are not as robust as the indigenous breeds. The growing and egg-laying potential of these birds are also unknown.

This article was originally published in the July 2017 edition of Poultry Digital.